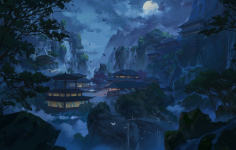 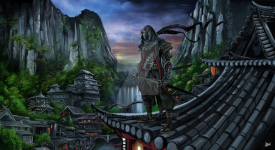 These were difficult times; not a single soul could deny this. The five great nations had no longer held the political and militaristic power they once held and not only did humans express greed in obtaining, this extended to the beast. The wolverines had an extensive history of violent behavior. Their power was great enough to damage the predecessors of the Land of Wolverines. Successfully killing one of the Wolverine elders, they were exiled from the land. Soon after they were stationed on the infamous Island turtle. Both Krysta and Kumaru dominated the island that consisting of daily mortalities and ferocity. Their fate was sealed as they partook in the daily battles that exhausted their stamina. Bested the Giant Squid that protected the island, the wolverines relocated elsewhere, now stationed in Emono town.

The two wolverines were easily the tallest within the town towering over any building. Thumps echoed through the vicinity as their feet pounced on the ebony brown floor. Each thrust into the earth gave birth to dust clouds concealing their feet from the naked eye. The hearts of those within this sector beat increasingly, doubting their vitality and if they'd be blessed to escape the humongous beast. Out of sight and out of mind, their bodies instinctively activated flight mode and generated chakra to their feet in order to boost their natural speed, though for most it had not worked. The wolverines had not been moving at a fast pace, but those who had trained their body to move fast enough were ultimately crushed by the wolverines' weight. Those who had been granted impressive agility were caught off balance by the summonings' footsteps, causing their bodies to wobble each time their four paws collided with the Earth. Kumogakure ninja whose body jolted with the Will of Lightning moved instinctively off willpower and attempted to challenge the colossal monsters. Their lightning-infused kunai rebounded off their legs, and their chakra channeled through the kunai dwindled away shortly after. Catching their attention, the beast's head shifted in their direction.

Without warning the beast exhaled a powerful screech that brought their attackers to their knees. Not only was the screech unbearable, but it decimated the buildings they were standing on. Not having the ability to block the sound and secure a safe fall, they crashed into the ground, and bodies dispersed everywhere similar to watermelons plummeting into the ground. Their stomachs growled aggressively causing the wolverines to increase their pace as they suffered from malnutrition. Their teeth sank into the dead flesh that surrounded them. They were not cannibalistic, but their empty stomachs had tormented their bodies causing them to result in low tactics. Their stomachs still snarled after eating the hundreds of bodies, still unsatisfied they planned to venture forward until hunger ceased.